How to Set Up Automation Anywhere RPA Client – Community Edition

From the Control Room, you can download the RPA client, schedule bots to run, view bot activity, or launch the other Automation Anywhere apps. This document will only focus on the RPA client.

Once the client is downloaded from the Control Room, you can log in using the credentials sent to you when you signed up for Automation Anywhere. In the client, on the left side of the screen, under “Automate,” you can view your saved bots, metabots, and workflows, as well as visit the bot store. Under “Manage,” you can view your bot repositories, scheduled bots, triggers, and reports. In the bar at the top of the client, you can create a new bot, start a new recording, run or edit a selected bot, or view an estimated return on investment (ROI) gained from using Automation Anywhere bots. The ROI estimate is calculated using an annual salary and the amount of time saved by using the bots rather than doing the tasks by hand.

To create a new bot, click “New,” then click on “Workbench.” This opens the Bot Creator window, shown below. 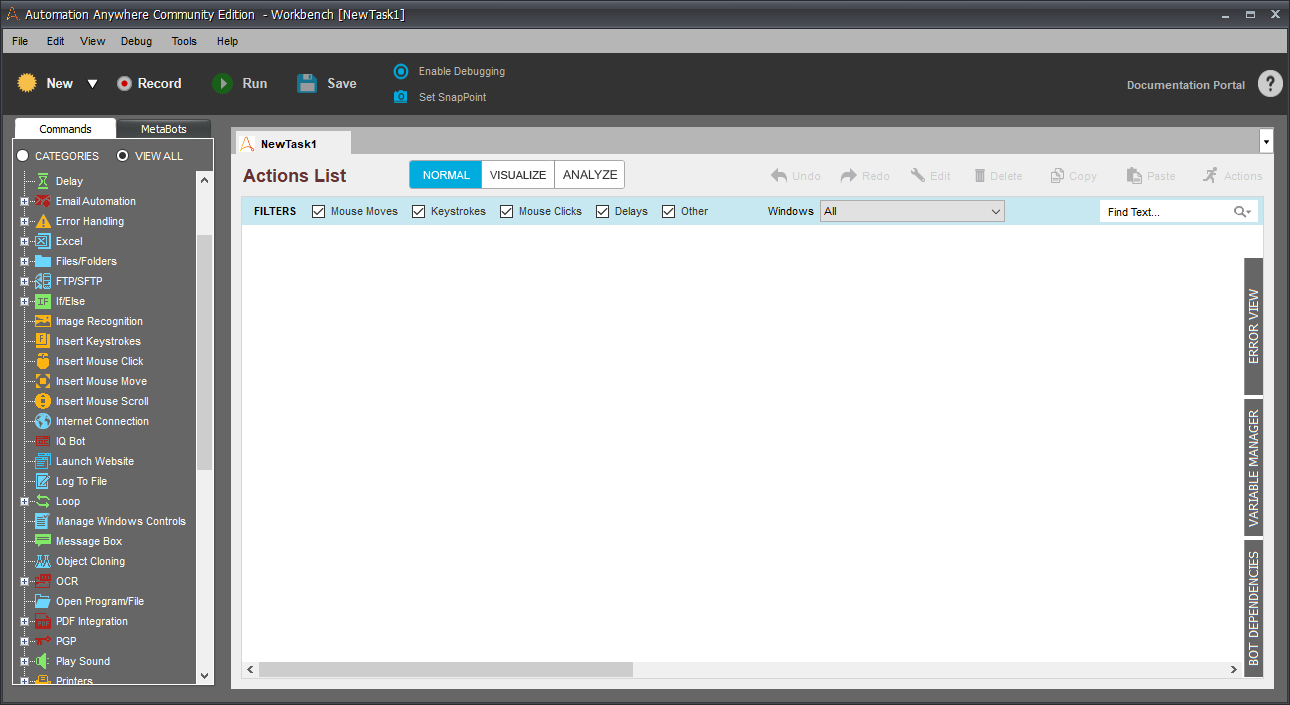 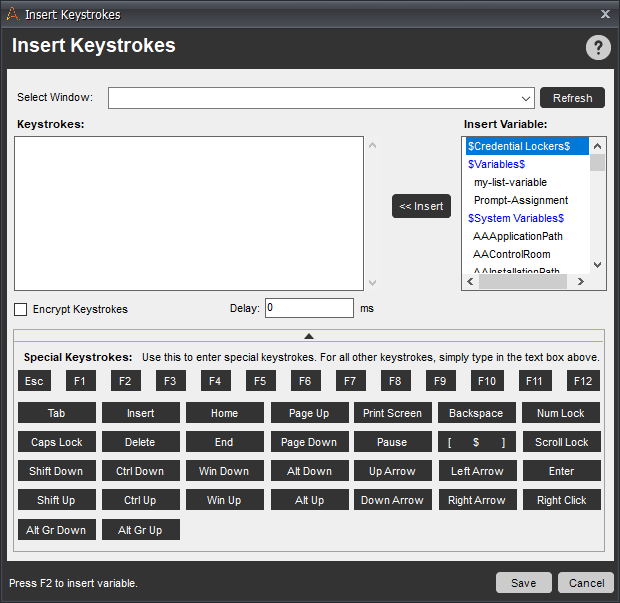 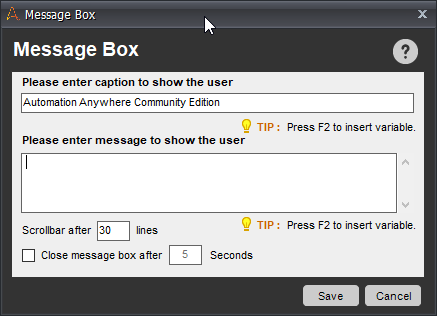 You can also record actions by clicking on “Record.” This allows your bot to perform tasks such as clicking on web objects, opening menus, etc. There are 3 types of recorders: Smart Recorder, Screen Recorder, and Web Recorder. The Smart Recorder is the most versatile of the recorders, as it allows the bot to recognize objects in many different apps, while the Web Recorder is limited to Internet Explorer and the Screen Recorder requires the same screen size/resolution to be set as it was recorded. Actions performed by these recorders can be set by coordinates, objects, or images, although the Automation Anywhere RPA client cannot recognize objects in every application. Once the recording is complete, the client will add a list of commands that correspond to the actions done when recording to the actions list. Additionally, variables can be created and edited using the Variable Manager tab on the right-hand side of the screen. These variables can be used in many of the commands, such as Keystrokes and Object Cloning, by pressing F2 when configuring a command. Variable values can be set when they are created or by using the Variable Operation command, which is useful if the variable changes values during the task.

Metabots are another feature of the Automation Anywhere RPA Client, and are essentially the building blocks of bots. They can be used by any bot, similarly to a command, by clicking on the Metabot tab in the workbench. When a metabot is changed, the change is automatically applied to every bot that utilizes it. To create a new metabot, click on the “Metabot” tab under “Automation” in the AA Client, then click “New.” This will open the Metabot Designer, which is used to configure a metabot. From here, you can add assets, which capture objects in a window for later use. Assets captured are done using standard or OCR capture types. Once assets are added to a metabot, logic must be added. Metabot logic is a list of commands that are performed on the captured assets. When a metabot is added to a task, the window below pops up, allowing you to select the values of the metabot variables.

More Resources to Get You Started

There are several free courses here. Many of them are geared towards specific users, but the Bot Developer course is very helpful when getting used to the tools and contains much of the information required for the Automation Anywhere Advanced RPA Professional certificate (v11).