When it comes to taxes, the US government can be particular about how they want taxes prepared and calculated. In the state of Louisiana, taxes are applied to the physical well’s volume and sales allocated, and not to the tract. A tract is an ownership percentage of one-to-many physical wells.

The problem: Our client has an allocation system that applied taxes to the tracts and not to the physical wells. The client attempted to take those tract results back into the physical wells, which was proved to be difficult and time-consuming. Complicating matters further, two sets of physical wells were added together and then split 25/75 based on contract terms, and some were Take-in-Kind contracts. This led to too many errors in taxes paid.

The client also had to deal with paying on six different types of taxes. Three of them were volumetric-based, while the remaining three were based on sales value. Depending on the exemption status of the physical well, applying three tiers of rates depending on exemption certificate was also needed. This led to 12 different tax entries for each owner tract settled 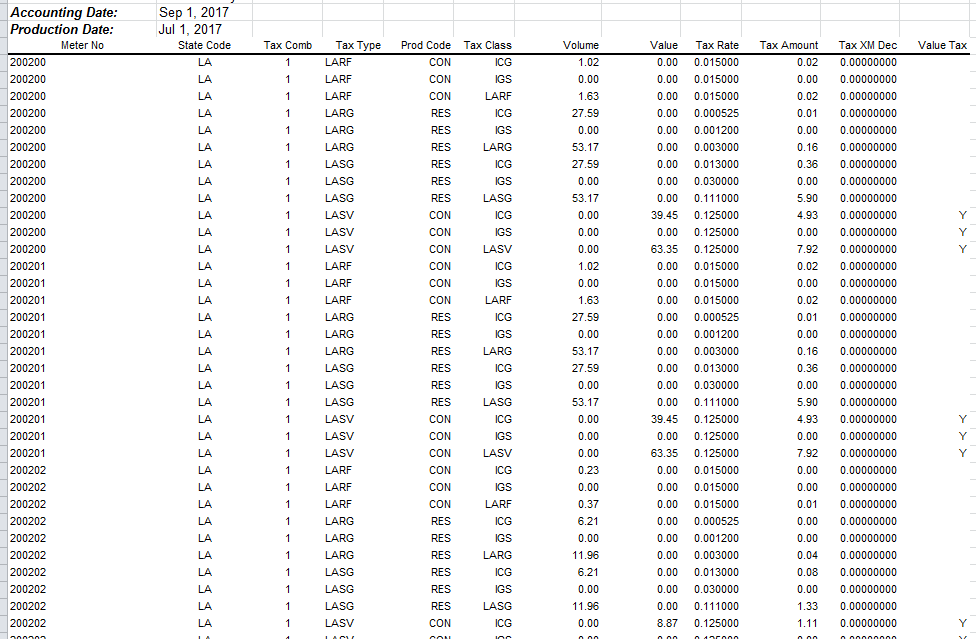 The solution: The allocation system that the client used already contained all the information we needed to produce the required result: physical wells’ volume, the rates, liquid allocation, and meter type to determine which rate to use.

We created a report that would calculate the information we needed and be easily loaded via template into the client’s database. This report calculated the taxable volume for taxes paid on volume per physical well and on calculated sales condensate values. Each meter was broken out by the six taxes charged in the report to be uploaded. Unlike the tracts, physical wells could only have six different charges of tax on Gas and Liquids, while tracts could have up to 18.

We created another report to help the tax department determine which physical meters needed to apply for tax exemption or reduction based on flow hours. Lower flow hours allowed them to apply for a reduction in tax rates in a timelier manner.

The Conclusion: These new reports helped the tax department process tax filings faster and created a more efficient means of communication between the tax department and accounting pertaining to the application of exemption to physical wells. The solution also prompted the client to invest resources in accounting software that mimics the report function in the application itself, by calculating the taxes before dividing them into tracts.