This article explores the similarities and differences of Alteryx and Dataiku—ultimately highlighting the unique features of Alteryx that make it the preferred analytics platform for data-informed organizations.

Here’s a quick breakdown of the differences between Alteryx and Dataiku.

Alteryx:  Alteryx provides different options for joining disparate data together, including a standard Join, Multi-Join, and Fuzzy Match capabilities. While configuring a Join tool, users can rename and drop fields in their data as well as review any unmatched records in the results pane.

Dataiku: Dataiku uses the join tool visual recipe. Unlike Alteryx, this tool does not contain embedded functionality to modify fields. A user would need to open the newly created dataset to make any additional modifications to a column or field.

Dataiku: Dataiku shows the summary statistics in the datasets window. A red identifier is used to indicate values that do not match the inferred meaning of the column.

Alteryx: Alteryx allows users to modify existing columns and create new columns using the Formula tool. A single formula tool can contain multiple formulas or expressions for different columns. Formulas are processed in the order they are written so new or modified columns can be referenced downstream in the same Formula tool. Users can also save their own commonly used expressions for future use or take advantage of the pre-written commonly used expressions provided by Alteryx, such as contains(), replace(), and if/else to name a few.

Alteryx: Alteryx provides users the flexibility to drag and drop tools from the tool palette or search bar into the canvas and move or rearrange as needed. Users can auto-align or evenly distribute groups of tools for added organization on the canvas.

Dataiku: Dataiku’s visual recipes are placed by the software in the flow window. There is limited flexibility on the arrangement of recipes.

Alteryx: Alteryx offers a variety of ways to learn and become an analytics expert. They provide free materials and resources like Interactive Lessons, Starter Kits, and a robust community forum to ask questions and learn from other Alteryx users. Alteryx also offers free certifications for folks at all different stages in their analytics journey: Foundational concepts, Core tools, Advanced tools, Expert, and Predictive Master.

Alteryx is a software solution focused on analytics and automation. In fact, many Alteryx users transition from Excel to Alteryx because they can automate a process to parse, cleanse, transform, and enrich their data which is scalable and repeatable, unlike in Excel.

With Alteryx, users can read and connect data from many disparate sources, including flat files like Excel and CSV, databases such as SQL Server and PostgreSQL, third-party integrations like Salesforce and Google Analytics, and cloud storage such as Snowflake or Azure. Once data is read into Alteryx, it can be combined using joins, unions, appends, or a combination of these tools.

When the data is ready for cleansing and manipulation, Alteryx offers a variety of tools to make transformations and aggregations easy such as formulas, filters, pivot, and summarize. Alteryx also provides input and output anchors at each tool so you can see the changes in your data as they happen at each stage of a workflow. Having this functionality makes testing and analyzing different transformations easy and informative.

When users are ready to share their enhanced data or analysis outside of Alteryx, they can utilize the same functionality for reading data with additional connectors like Marketo, PowerBI, and Tableau. Alteryx provides a comprehensive and compatible analytics solution to integrate seamlessly with common BI tools like Tableau and PowerBI. Conversely, Dataiku software seeks to replace these integrations with its software.

By automating these once manual processes with Alteryx, analysts can focus on strategic priorities instead of basic data cleansing and preprocessing. In turn, companies can enhance their advanced analytics practice in ways that were not possible before due to constraints on resources.

Alteryx software operates in a no-code framework so that non-technical users can create ETL pipelines and analytic apps without writing a line of code. In a world where businesses are becoming more data-integrated and insights-driven, having software like Alteryx is crucial to knock down barriers between technical and business users. Tasks that once required the expertise of a software engineer can now be automated in a workflow built by an analyst.

Below is a detailed comparison of Alteryx and Dataiku:

Dataiku’s interface consists of three main parts: flow, datasets, and recipes. Flow displays a user’s current workflow. Datasets shows a list of all data sources, used and unused, imported with the workflow. Recipes store any transformations to the existing datasets. Dataiku gives users the option to start a project in a centralized space that can be accessed by multiple users to collaborate. With Dataiku’s visual recipe you can cleanse, normalize, enrich, and aggregate data without writing any lines of code. Conversely, Dataiku offers code recipes to execute user-defined code when needed. In the workflow, the action tab allows users to export, publish, or explore the dataset and provides the user access to recipes. The details icon shows information about a workflow such as created date, last modified date, and user permissions. The discussion icon is visible to all users with access to the project and pushes notifications for important updates. The lab icon displays all the visual analysis tools and code notebooks. Lastly, the timeline icon shows the workflow changes over time from when it was created to the last modification. 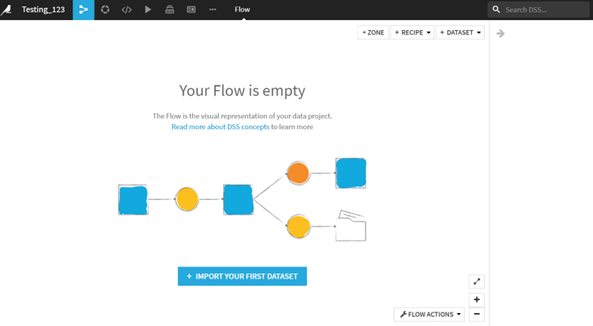 Alteryx Designer, consists of four main components: tool palette, canvas, configuration window, and results window. The tool palette hosts all tools a user could utilize in their workflow to read, cleanse, join, aggregate, enrich, and output their data. The canvas is where a user can connect various tools to perform a sequence of actions, ultimately building a workflow. The configuration window allows a user to configure specific tools in a workflow as well as the settings behind an entire workflow. Lastly, the results window allows users to see their data as it enters a tool, and how it looks after being modified by a tool. Being able to see how the data transforms at various stages in a workflow is vital when building a complex analytics workflow.

Alteryx and Dataiku have a similar way of reading data into a workflow. Alteryx uses the Input Data tool to bring in data sources while Dataiku uses its dataset tab to import. Alteryx allows a variety of input methods including Excel and csv files, cloud connections such as Snowflake, Databricks, and Azure, as well as other ODBC connectors for common on-prem databases like Microsoft SQL Server, Oracle, and PostgreSQL to name a few.

Nearly every analytical process involves combining data from different sources to produce deep and meaningful insights. The join tool in Alteryx can associate rows of one data source to rows of another by joining on record position or specific fields using a primary key. In Dataiku, joins are performed using the Join visual recipe. However, Alteryx natively offers multiple types of joins in the tool palette for a better user experience:

Both Alteryx and Dataiku provide custom field selection in joins.

Unlike Dataiku, Alteryx identifies leading and trailing whitespace when analyzing data quality and can differentiate between null and empty values in the data health summaries.

Both Alteryx and Dataiku show data preview after writing the formula.

The formula tool in Alteryx can be used to modify data in an existing column or create a new column. A single formula tool can contain multiple formulas for multiple different columns and contains a data preview to audit an expression before applying it to the entire column. Users can modify the size and data type of new or existing columns referenced in the Formula tool as well. Additionally, Alteryx users can see recent expressions and save their frequently used expressions for future reference. Alteryx also offers formula suggestions based on the data type of the column.

In Dataiku, the formula tool is a part of the data preparation visual recipe. The tool would take the user to the data preparation recipe window where they would have to write a function for each column in a new step. It can be difficult for Dataiku users to track when and where a formula is used in robust workflows since they cannot see all the formula applications in one place. Thus, the consolidation of multiple processes in the data preparation visual recipe takes away the per-step-level tracking from the users in Dataiku. Dataiku also forces a default new column name that must be changed in an additional step when creating new columns and modifying existing ones. These changes are not visible in the flow window in Dataiku like they are in Alteryx.

Alteryx Designer offers its users lots of flexibility to arrange tools as they please on the canvas. There are also pre-built options to align and distribute tools horizontally or vertically. The flexibility to customize flow design is useful for people that want to display their workflow logic visually. Dataiku does not offer this functionality. The visual recipes are placed by the software in the flow window after configuration and provide the end user no flexibility to change or move things around.

Alteryx offers a variety of ways to learn and become an analytics expert. They provide free materials and resources like Interactive Lessons, Starter Kits, and a robust community forum to ask questions and learn from other Alteryx users. Alteryx also offers free certifications for folks at all different stages in their analytics journey: Foundational concepts, Core tools, Advanced tools, Expert, and Predictive Master.